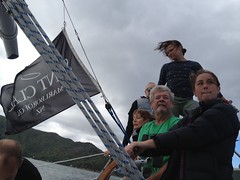 Saint Clair sponsored Maracas, owned and skippered by Ash Davey. Ash is Saint Clair’s ‘nautical ambassador’ and a huge fan of Saint Clair wine, especially our Wairau Reserve Sauvignon Blanc and Omaka Reserve Pinot Noir. Ash has done several sailing trips through the Pacific Islands with cases of Saint Clair wine onboard for consumption by the crew and, if there is any left, to show off to other sailors they meet on their travels.

Maracas was crewed on Saturday by twelve keen sailors from the Saint Clair Family Estate team. Assistant winemaker Heather has sailed with Ash on Maracas for over a year in Waikawa Boating Club’s competitive racing series, however on Saturday she took on arguably the most important role on the boat of ‘drinks movement officer’, ensuring the crew were well fuelled with beers and Saint Clair wine during the gruelling race. Chief winemaker Hamish is also a seasoned sailor and he took control of the busy foredeck. The remainder of the crew were sailing novices, but this didn’t make them exempt from helping out. Lab technician Aryel was in charge of the helm, while office junior Paige and stock controller Alex shared the muscle burning job of trimming the mainsail. Logistics administrator Julie trimmed the headsail and cellarhand Bob took on the important role of ‘rail meat’, helping to stabilise the boat.

The other eleven yachts in the race were crewed by other local Marlborough businesses, and there was plenty of friendly competition. Several crews were armed with ‘soft missiles’ such as water bombs. Saint Clair’s ‘armed defender’ Sylvie, one of our upcoming harvest interns, ensured that Maracas was well defended with water pistols, although there were a few casualties on our crew who ended up drenched. The rival attackers were unable to slow us down however, and the Saint Clair crew took line honours, crossing the finish line at least a minute earlier than the rest of the fleet. 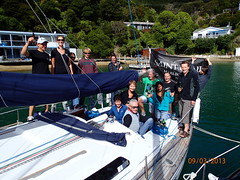 The beautiful Marlborough Sounds put on perfect weather conditions for us on the day. There was plenty of good wind, making for an interesting and challenging race. The novice sailors amongst us were both alarmed and exhilarated as the boat keeled over as we went upwind, with our trimmers getting rather wet feet by the end of the race. The notoriously changeable Marlborough Sounds winds also meant that we had to put in a lot of tacks, which required our foredeck crew and ‘rail meat’ to scramble across the foredeck while ducking to avoid the boom, which resulted in some impressively bruised legs. Following the race the wind died down and the clouds parted to allow the beautifully warm early autumn sun to shine down on us. Maracas rafted up with Bavaria, crewed by Blenheim BNZ bank, and soaked up the sun while sipping on Saint Clair Sauvignon Blanc and nibbling on Bob’s home baked bread, to celebrate a great afternoon’s racing.

The Saint Clair crew made an impressive entrance into the Waikawa Boating Club clubrooms for the prize giving, dressed in monks’ and nuns’ habits (a Saint Clair tradition at the Marlborough Wine and Food Festival), led by Ash dressed as the Pope. Unfortunately due to Maracas’ handicap Saint Clair narrowly missed out on one of the top three placings and therefore also the advertising prizes generously donated by Media Works and the Marlborough Express. We won a bottle of Mt Gay rum for being first across the line, which we gave to our skipper Ash, who being a true sailor is as passionate about rum as he is the ocean and Saint Clair wine.

The Charity Yacht Race was a great event, for a great cause, and the Saint Clair crew thoroughly enjoyed the day. It was fantastic to get out on the water and enjoy the stunning Marlborough Sounds while learning a new sport, and there are some keen new converts to yachting amongst the Saint Clair team. We will certainly be back next year, with first prize in our sights and the new 2013 Saint Clair wines in our hands.