After weeks of preparation five Marlborough wineries faced off in the annual Inter-Winery Rowing Regatta on Saturday in a test of teamwork, co-ordination and sheer grunt.

Held on the Wairau River which flows through picturesque vineyards in the lower Wairau Valley, the competition is the Blenheim Rowing Club’s annual fundraiser which has been running for five years. 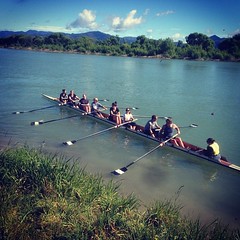 But the wineries, including our own squad from Saint Clair Family Estate, weren’t there for the scenery. After spending six weeks of intensive training under the expert guidance of club member Harry Taylor, the Saint Clair crew were hoping to put in a strong performance.

However they faced stiff competition from more experienced teams – last year’s winners Delegats were determined to hold onto the title, while previous winners Indevin and Giesen’s and fellow newcomers Wairau River were each determined to topple their rivals too.

This is the first year that Saint Clair Family Estate have entered the competition, and although they had honed their skills with two vigorous training sessions each week, they were not able to fend off their more experienced counterparts, with Giesens winning the trophy and subsequent bragging rights for the next year.

Far from disappointed, assistant winemaker Heather Stewart said they were pleased to place 4th and were already looking ahead to next year’s competition.

“It was an awesome day and we were really proud of how well we rowed considering we were all novices.”

It had been a great experience for team members, who worked in different departments of the family-owned wine business, to get to know each other better, Heather says. 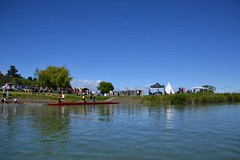 “It’s very much a team sport, you’ve literally all got to stroke at the same time, and when you’re out there on the water the pressure’s on not to let the rest of the team down.”

Regatta organiser Richelle Collier said the tournament was one of the club’s biggest fundraisers and the money raised would go towards buying new boats for the club.

“There was a great turn out on the day and the weather was perfect, you couldn’t ask for more really.”